How large is the W mass anomaly

Everything is larger in the US: cars, homes, food portions, people. The CDF collaboration from the now defunct Tevatron collider argues that this phenomenon is rooted in fundamental physics: 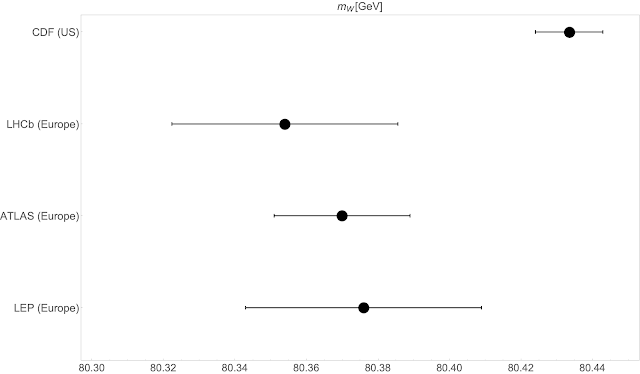 The plot shows the most precise measurements of the mass of the W boson - one of the fundamental particles of the Standard Model. The lone wolf is the new CDF result. It is clear that the W mass is larger around the CDF detector than in the canton of Geneva, and the effect is significant enough to be considered as evidence.  More quantitatively, the CDF result is

But jokes aside, what should we make of the current confusing situation?  The tension between CDF and the combination of the remaining mW measurements is whopping 4.1 sigma.  What value of mW should we then use in the Standard Model fits and new physics analyses? Certainly not the CDF one, some 6.5 away from the Standard Model prediction, because that value does not take into account the input from other experiments. At the same time we cannot just ignore CDF. In the end we do not know for sure who is right and who is wrong here. While most physicists tacitly assume that CDF has made a mistake, it is also conceivable that the other experiments have been suffering from the confirmation bias. Finally, a naive combination of all the results is not a sensible option either.  Indeed, at face value the Gaussian combination leads to mW = 80.410(7) GeV. This value is however not very meaningful from the statistical perspective: it's impossible to state,  with 68 percent confidence, that the true value of the W mass is between 80.403 and 80.417 GeV. That range doesn't even overlap with either of the most precise measurements from CDF and ATLAS!  (One should also be careful with Gaussian combinations because there can be subtle correlations between the different experimental results. Numerically, however, this should not be a big problem in the case at hand, as in the past the W mass results obtained via naive combinations were in fact very close to the more careful averages by Particle Data Group). Due to the disagreement between the experiments, our knowledge of the true value of mW is degraded, and the combination should somehow account for that.

The question of combining information from incompatible measurements is a delicate one, residing at a boundary between statistics, psychology, and arts. Contradictory results are rare in collider physics, because of a small number of experiments and a high level of scrutiny. However, they are common in other branches of physics, just to mention the neutron lifetime or the electron g-2 as recent examples. To deal with such unpleasantness, Particle Data Group developed a totally ad hoc but very useful procedure. The idea is to penalize everyone in a democratic way, assuming that all experimental errors have been underestimated. More quantitatively, one inflates the errors of all the involved results until the χ^2 per degree of freedom in the combination is equal to 1.  Applying this procedure to the W mass measurements, it is necessary to inflate the errors by the factor of S=2.1, which leads mW = 80.410(15) GeV. 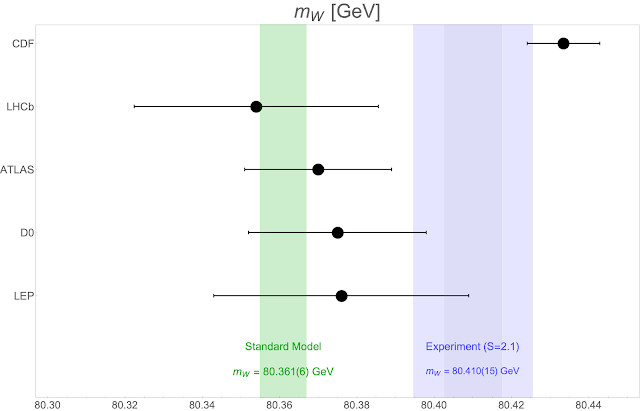 The inflated result make more intuitive sense, since the combined 1 sigma band overlaps with the most precise CDF measurement, and lies close enough to the error bars from other experiments. If you accept that combination, the tension with the Standard Model stands at 3 sigma. This value fairly well represents the current situation: it is large enough to warrant further interest, but not large enough to claim a discovery of new physics beyond the Standard Model.

The confusion may stay with us for long time. It will go away if CDF finds an error in their analysis, or if the future ATLAS updates shift mW significantly upwards.  But the most likely scenario in my opinion is that the Europe/US divide will only grow in time.  The CDF result could be eliminated from the combination when other experiments reach a significantly better precision. Unfortunately, this is unlikely to happen in the foreseeable future; new colliders and better theory calculations may be necessary to shrink the error bars well below 10 MeV. The conclusion is that particle physicists should shake hands with their nuclear colleagues and start getting used to the S-factors.

Comments that are too long, too wrong, too off-topic, or elaborating on your latest theory of everything will likely be deleted. External links better be directly relevant. Comments on posts older than 3 days are moderated: they appear (or not) after some delay. For posts older than ~1 month comments are usually disabled. Comments should not be grossly offensive to third parties, however insulting the author of this blog is allowed and even encouraged.