Why is it when something happens it is ALWAYS you, muons?

April 7, 2021 was like a good TV episode: high-speed action, plot twists, and a cliffhanger ending. We now know that the strength of the little magnet inside the muon is described by the g-factor:

Any measurement of basic properties of matter is priceless, especially when it come with this incredible precision.  But for a particle physicist the main source of excitement is that this result could herald the breakdown of the Standard Model. The point is that the g-factor or the magnetic moment of an elementary particle can be calculated theoretically to a very good accuracy. Last year, the white paper of the Muon g−2 Theory Initiative came up with the consensus value for the Standard Model prediction

which is significantly smaller than the experimental value.  The discrepancy is estimated at 4.2 sigma, assuming the theoretical error is Gaussian and combining the errors in quadrature.

As usual, when we see an experiment and the Standard Model disagree, these 3 things come to mind first 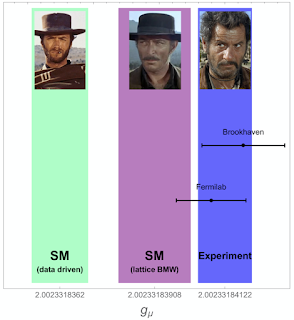 The odds for 1. are extremely low in this case.  3. is not impossible but unlikely as of April 7. Basically the same experiment was repeated twice, first in Brookhaven 20 years ago, and now in Fermilab, yielding very consistent results. One day it would be nice to get an independent confirmation using alternative experimental techniques, but we are not losing any sleep over it. It is fair to say, however,  that 2. is not yet written off by most of the community. The process leading to the Standard Model prediction is of enormous complexity. It combines technically challenging perturbative calculations (5-loop QED!), data-driven methods, and non-perturbative inputs from dispersion relations, phenomenological models, and lattice QCD. One especially difficult contribution to evaluate is due to loops of light hadrons (pions etc.) affecting photon propagation.  In the white paper,  this hadronic vacuum polarization is related by theoretical tricks to low-energy electron scattering and determined from experimental data. However, the currently most precise lattice evaluation of the same quantity gives a larger value that would take the Standard Model prediction closer to the experiment. The lattice paper first appeared a year ago but only now was published in Nature in a well-timed move that can be compared to an ex crashing a wedding party. The theory and experiment are now locked in a three-way duel, and we are waiting for the shootout to see which theoretical prediction survives. Until this controversy is resolved, there will be a cloud of doubt hanging over every interpretation of the muon g-2 anomaly.

But let us assume for a moment that the white paper value is correct. This would be huge, as it would mean that the Standard Model does not fully capture how muons interact with light. The correct interaction Lagrangian would have to be (pardon my Greek)

The first term is the renormalizable minimal coupling present in the Standard Model, which gives the Coulomb force and all the usual electromagnetic phenomena. The second term is called the magnetic dipole. It leads to a small shift of the muon g-factor, so as to explain the Brookhaven and Fermilab measurements.  This is a non-renormalizable interaction, and so it must be an effective description of virtual effects of some new particle from beyond the Standard Model. Theorists have invented countless models for this particle in order to address the old Brookhaven measurement, and the Fermilab update changes little in this enterprise. I will write about it another time.  For now, let us just crunch some numbers to highlight one general feature. Even though the scale suppressing the effective dipole operator is in the EeV range, there are indications that the culprit particle is much lighter than that. First, electroweak gauge invariance forces it to be less than ~100 TeV in a rather model-independent way.  Next, in many models contributions to muon g-2 come with the chiral suppression proportional to the muon mass. Moreover, they typically appear at one loop, so the operator will pick up a loop suppression factor unless the new particle is strongly coupled.  The same dipole operator as above can be more suggestively recast as

The scale 300 GeV appearing in the denominator indicates that the new particle should be around the corner!  Indeed, the discrepancy between the theory and experiment is larger than the contribution of the W and Z bosons to the muon g-2, so it seems logical to put the new particle near the electroweak scale. That's why the stakes of the April 7 Fermilab announcement are so enormous. If the gap between the Standard Model and experiment is real, the new particles and forces responsible for it should be within reach of the present or near-future colliders. This would open a new experimental era that is almost too beautiful to imagine. And for theorists, it would bring new pressing questions about who ordered it.

Comments that are too long, too wrong, too off-topic, or elaborating on your latest theory of everything will likely be deleted. External links better be directly relevant. Comments on posts older than 3 days are moderated: they appear (or not) after some delay. For posts older than ~1 month comments are usually disabled. Comments should not be grossly offensive to third parties, however insulting the author of this blog is allowed and even encouraged.