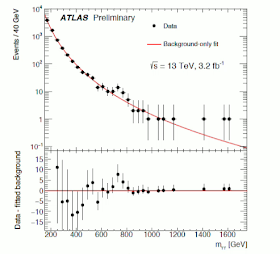 ATLAS and CMS presented today a summary of the first LHC results obtained from proton collisions with 13 TeV center-of-mass energy. The most exciting news was of course the 3.6 sigma bump at 750 GeV in the ATLAS diphoton spectrum, roughly coinciding with a 2.6 sigma excess in CMS. When there's an experimental hint of new physics signal there is always this set of questions we must ask:

0. WTF ?
0. Do we understand the background?
1. What is the statistical significance of  the signal?
2. Is the signal consistent with other data sets?
3. Is there a theoretical framework to describe it?
4. Does it fit in a bigger scheme of new physics?

Let us go through these questions one by one.

The background.  There's several boring ways to make photon pairs at the LHC, but they are expected to produce a  spectrum smoothly decreasing with the invariant mass of the pair. This expectation was borne out in run-1, where the 125 GeV Higgs resonance could be clearly seen on top of a nicely smooth background, with no breaks or big wiggles. So it is unlikely that some Standard Model processes (other than a statistical fluctuation) may produce a bump such as the one seen by ATLAS.

The stats.   The local significance is 3.6 sigma in ATLAS and 2.6 sigma in CMS.  Naively combining the two, we get a more than 4 sigma excess. It is a very large effect, but we have already seen this large fluctuations at the LHC that vanished into thin air (remember 145 GeV Higgs?). Next year's LHC data will be  crucial to confirm or exclude the signal.  In the meantime, we have a perfect right to be excited. 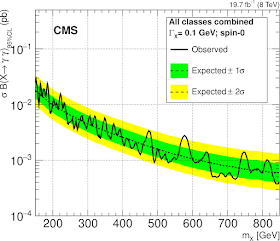 The consistency. For this discussion, the most important piece of information is the diphoton data collected in run-1 at 8 TeV center-of-mass energy.  Both ATLAS and CMS have a small 1 sigma excess around 750 GeV in the run-1 data, but there is no clear bump there.  If a new 750 GeV  particle is produced in gluon-gluon collisions,  then the gain in the signal cross section at 13 TeV compared to 8 TeV is roughly a factor of 5.  On the other hand, there was 6 times more data collected at 8 TeV by ATLAS (3.2 fb-1 vs 20 fb-1). This means that the number of signal events produced in ATLAS at 13 TeV should be about 75% of those at 8 TeV, and the ratio is even worse for CMS (who used only 2.6 fb-1).  However, the background may grow less fast than the signal, so the power of the 13 TeV and 8 TeV data is comparable.  All in all, there is some tension between the run-1 and run-2 data sets,  however a mild downward fluctuation of the signal at 8 TeV and/or a mild upward fluctuation at 13 TeV is enough to explain it.  One can also try to explain the lack of signal in run-1 by the fact that the 750 GeV particle is a decay product of a heavier resonance (in which case the cross-section gain can be much larger). More careful study with next year's data  will be needed to test for this possibility.

The model.  This is the easiest part :)  A resonance produced in gluon-gluon collisions and decaying to 2 photons?  We've seen that already... that's how the Higgs boson was first spotted.  So all we need to do is to borrow from the Standard Model. The simplest toy model for the resonance would be a new singlet scalar with mass of 750 GeV coupled to new heavy vector-like quarks that carry color and electric charges. Then quantum effects will produce, in analogy to what happens for the Higgs boson, an effective coupling of the new scalar to gluons and photons:

By a judicious choice of the effective couplings (which depend on masses, charges, and couplings of the vector-like quarks) one can easily fit the diphoton excess observed by ATLAS and CMS. This is shown as the green region in the plot. 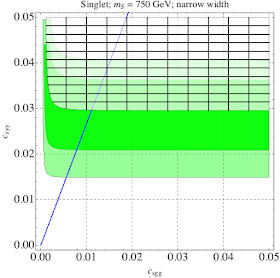 If the vector-like quark is a T', that is to say, it has the same color and electric charge as the Standard Model top quark, then the effective couplings must lie along the blue line. The exclusion limits from the run-1 data (mesh) cut through the best fit region, but do not disfavor the model completely. Variation of this minimal toy model will appear in a 100 papers this week.

The big picture.  Here sky is the limit. The situation is completely different than 3 years ago, where there was one strongly preferred (and ultimately true) interpretation of the 125 GeV diphoton and 4-lepton signals as the Higgs boson of the Standard Model. On the other hand,  scalars coupled to new quarks appear in countless model of new physics. We may be seeing the radial Higgs partner predicted by little Higgs or twin Higgs models, or the dilaton arising due to spontaneous conformal symmetry breaking, or a composite state bound by new strong interactions.  It could be a part of the extended Higgs sector in many different context, e.g. the heavy scalar or pseudo-scalar in the two Higgs doublet models.  For more spaced out possibilities, it could be the KK graviton of the Randall-Sundrum model, or it could fit some popular supersymmetric models such as the  NMSSM. All these scenarios face some challenges.  One is to explain why the branching ratio into two photons is large enough to be observed, and why the 750 GeV scalar is not seen in other decays channels, e.g. in decay to W boson pairs which should be the dominant mode for a Higgs-like scalar.  However, these challenges are nothing that an average theorist could not resolve by tomorrow morning.  Most likely, this particle would just be a small part of the larger structure, possibly having something to do with electroweak symmetry breaking and the hierarchy problem of the Standard Model.  If the signal is a real thing, then it may be the beginning of a new golden era in particle physics....
Jester