The BICEP claim of detecting the primordial B-mode in the polarization of the Cosmic Microwave Background was a huge news. If confirmed, it would be an evidence of gravity waves produced during cosmic inflation, and open a window on physics at an incredibly high energy scale of order 10^16 GeV. Possible implications were described in detail in some 300 papers triggered by the BICEP announcement.  But, among this understandable excitement, we have been aware that the signal has to be confirmed by other experiments before the discovery is established. Back then, Résonaances precisely estimated the chances of the signal being true at `fifty-fifty'.  It appears it's the latter fifty that's gaining an upper hand...

Barring a loose cable, the biggest worry about the BICEP signal is that the collaboration may have underestimated the galactic foreground emission. BICEP2 performed the observations at only one frequency of 150 GHz which is very well suited to study the CMB, but less so for polarized dust or synchrotron emission. As for the latter, more can be learned by going to higher frequencies, while combining maps at different frequencies allows one to separate the galactic and the CMB component. Although the patch of the sky studied by BICEP is well away from the galactic plane, the recently published 353 GHz polarized map from Planck demonstrates that there may be significant emission from these parts of the sky (in that paper the BICEP patch is conveniently masked, so one cannot draw any quantitative conclusions). Once the dust from the BICEP announcement had settled, all eyes were thus on precision measurements of the galactic  foreground. The rumors that have been arriving from the Planck camp were not encouraging, as they were not able to confirm the primordial B-mode signal. It seems that experts now put a finger on what exactly went wrong in BICEP. 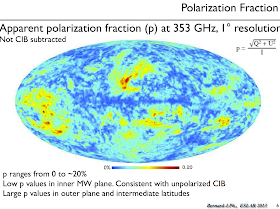 To estimate polarized emission from the galactic dust, BICEP digitized an unpublished 353 GHz map shown by the Planck collaboration at a conference.  However, it seems they misinterpreted the Planck results: that map shows the polarization fraction for all foregrounds, not for the galactic dust only (see the "not CIB subtracted" caveat in the slide). Once you correct for that and rescale the Planck results appropriately, some experts claim that the polarized galactic dust emission can account for most of the BICEP signal. The rumor is that the BICEP team has now admitted to the mistake [Update: this last statement is disputed and outwardly denied].

Note that we should not conclude that there is no observable tensor modes in the CMB. Indeed, the tensor to scalar ratio of order 0.1 is probably consistent with the existing experimental data, and may be responsible for a part of the B-mode signal detected by BICEP. New data from Planck, POLARBEAR, ACTpole, and Keck Array should clarify the situation within a year from now.  However, at this point, there seems to be no statistically significant evidence for the primordial B-modes of inflationary origin in the CMB.
Jester